I have had the chance to have an amazing few weekends in a row lately.  First, we will start with the most recent trip and work our way back! Since this blog is mainly about my family history I thought it a good idea to stop in a see some for myself.

I was invited on a combined birthday trip that my best friend and I take every chance we can.  It all started with going to the Harry Potter theme park in Orlando seven years ago and most recently ended with a trip to Asheville, NC to see one of the United States’ most beautiful and largest estates, the Biltmore.  I guess our taste has improved over the years.  That adventure will be featured in the next post!

Since I live in the Hampton Roads area of Virginia, a trip to Asheville took about seven hours.  To break up the monotony of interstate 40, I decided to make a small detour to Burlington about half the drive home.  The home was just a few miles off the highway, tucked into a grassy countryside and through the small little town of Alamance with its pink houses and rusty water tower.  There, nestled behind some walnut trees was the Alamance County Historical Museum or as I like to call it, the Holt family home.

Previously, I had done a small piece on the Holt family that had migrated from Germany and become the second colony to establish Germana.  This is part of the story about the descendants from Michael Holt.

The home is located on a part of a 1600-acre grain plantation, known during the 19th century as Oak Grove.  Three generations of Holt men owned the home.  It was built in three different stages, the first being in 1790 when it was just a two-room dwelling called a “dog trot”.  It was enlarged in 1800 and again in 1875.  The house is surrounded by outbuildings, including a granary, barn, corn crib and a carriage house.  There is a reconstructed summer kitchen behind the home between the property and the Holt family cemetery.

During the time that the family lived in the home, at the outbreak of the civil war, the family had enslaved African-Americans living at the home in cabins behind the house and across highway 62.   I know that this can be a very tricky subject to talk about.  I do not condone the actions of ancestors in my past, but it was a different time and out of my control.  But, it is a part of the history of the property and has an amazing story of one enslaved man who I think we should mention.

So, I pulled off highway 62 into a dirt parking lot and was greeted by a sign that told me a little more about the significance of the place.  I felt overwhelmed.  I was standing in a place that I had only read about during my research into the Holt side of the family.  It was neat to put a name with the face so to speak.  I made my way up the small dirt driveway and onto a brick path that wrapped around to the front of the home.  I was greeted by a sign that asked me to ring the doorbell.  The bell was inside the door itself and I gave it a few tiny turns and heard a faint ring behind the wood and glass.  I was soon greeted by a gentleman and was asked if I would like a tour of the home.  I said yes and we proceeded into the parlor as soon as I had signed my name in the guest book.  To say the least I think I left my mind on the wooded floor in the living area.  I felt like Catie, my daughter, when she was excited about something and it seemed as if her brain has just exploded from her skull.   Boom.

Inside the home are numerous original artifacts that are the Holt’s family treasures.  The music room was adorned with furniture and portraits and dress forms neatly draped in the clothing that once belonged to the family itself.  They were in such good condition I imagined they had just been taken out and dressed that very morning.  I was shown a grand piano that was purchased for the family and a large music box brought back from Switzerland that the gentleman gently cranked a few times around and began to play an eerily beautiful tune.

The entrance hall contained a large mirror and an English-made clock.  It was also the site of a marriage. 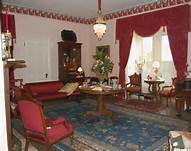 The parlor had velvety red chairs and a mirror that had been purchased in New York.  A large round table stood in the center of the room.  The piece had been made especially for the family by the free black artisan Thomas Day.

This led into the dining room which held many treasures.  Hand painted china littered the table in neatly placed sets.  The silver, which had been passed down through the female line, was engraved with the initials MEH.  The wallpaper covered with pineapples, was a sign of hospitality.  And the family had much still there to entertain from tea sets and ice cream makers to a cold beverage pitcher.  I was enthralled with all the artifacts that were in the home.

I ascended the stairs to the second floor and was greeted by even more artifacts.  In the room to the right were glass cases that held even more treasures pertaining to the family.  A portrait of Thomas Holt hung proudly, as he would become the 47th governor of North Carolina.  Samuel Holt had information about the ship he owned, the Mary

Hasbrouck, and would sail as far as Australia.  Dr. William Rainey Holt’s medicine chest from the civil war was tucked into a glass display next to Lynn Banks Holt’s rifle he used during the war.  Everything from an umbrella and purse to toys the Holt children played with were on exhibition.

In the next room was a family cradle and mourning attire, a reproduction wedding dress of the daughter who married a Count in Milan and a portrait of a young woman who married in New York and lived on Central Park Avenue.  These women I had never heard of before in my family history but cannot wait to find out more about. 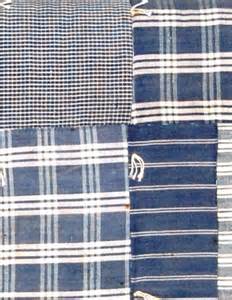 The last room in the home that I had the privilege of seeing gave more of the history about the textile industry and the cotton mill.  I learned that E.M. Holt developed the Alamance Plaid and founded what has now become Burlington Industries.   I saw a portrait of E.M. Holt showing him at the mill and women crowding around him looking at the fabrics of plaid as Caswell and his brother Sam, slave workers, helped stoke the fire and stir the indigo dye that would make the Alamance plaid what it was.

This was all so much to take in.  I had a plethora of knowledge just from a thirty-minute tour of a home that once belonged to members of my family.  E.M. Holt was my first cousin five times removed.   His father’s brother, William, was my 4th great grandfather.

Later, I got a small tour of the reconstructed summer kitchen outside and then was taken to the small family plot at the back of the home.  I had so much information that I could not wait to share with my sister and my mother.  This is after all, from my mother’s side of the family.

In 1837, E.M. Holt established the Alamance Cotton Factory.  The Alamance Plaid that was produced at the mills was the first colored cotton material commercially manufactured in the southern United States.  By the early 1900s the Holt family owned 24 cotton mills in Alamance County.  At his death in 1884, E.M. Holt was considered the wealthiest man in North Carolina.

Now, let’s go back to the story of one of the men who had been enslaved and was a part of the Holt family history.  His name was Caswell.  I had mentioned him as being a part of the portrait that hung in the museum portraying Mr. Holt and Mrs. Holt inside the mill.   Caswell was born at Oak Grove in 1834 and worked for E.M. Holt for about 30 years before becoming emancipated and setting up housekeeping with Jeremiah Holt on his farm.  He took the Holt last name as his own and married Amy, a woman who had also worked for the Holt family.  The story I was told was that he had become the first African-American deputy in the area and was sought after by the Klan.  Eventually it ended with a run in with Klan members and they had shot him.  He survived.  This is an attribution to the strength that Caswell must have possessed to be a successful man in that time period.  You can read more about Caswell and his life in “Historic Alamance County: An Illustrated History”.

Over the next few weeks, I hope I can explore more of the workings on the Holt family and its ties to Alamance County and the textile industry.  I also, hope again that one day soon, I can go back to explore the small town of Alamance and all the rich history it has to offer.

One thought on “The Plaid of Alamance County”