Or is it?  Since we are entering the month of October (and not to mention my second favorite holiday), I thought we could take a step back away from the family history side and do a little local history.  The kind of history that should chill you to your bones and keep you awake at night.  This month I would like to share a few of my local haunts and legends in the Hampton Roads area.

The Witch of Pungo

Grace Sherwood is a name that most natives to the Virginia Beach area are very familiar with.  Our very own witch that was tried among the hysteria of yesteryear.

Grace Sherwood was born in Virginia around the year of 1660.  She was the daughter of John White and Susan White.  At the age of twenty, she married James Sherwood in the Lynnhaven Parish Church and had three sons – John, James and Richard.  They settled in Pungo.  Not much is known about the Sherwood’s life before the year of 1698.  Their popularity seemed to come around when Grace and her husband sued their neighbors John and Jane Gisburne and Anthony and Elizabeth Barnes for defamation and slander.  They claimed that the Gisburne’s had said Grace had “bewitched their pigs to death and bewitched their cotton”.  She was accused of blighting gardens, causing livestock to die and influencing the weather.  Elizabeth even testified that Grace “came to her one night and rode her and went out of the key hole or crack of the door like a black cat”.  Needless to say, the Sherwoods lost both cases.

James Sherwood would die in 1701 and Grace would never remarry.  In 1705, she sued Luke and Elizabeth Hill for assault and won twenty pounds sterling in damages.  Later, Luke Hill and his wife would charge Grace with witchcraft after Elizabeth suffered from a miscarriage.  Back then it was a criminal offense.  Her trial was delayed several times and finally two panels of female women were gathered in March of 1706.  One was charged with searching Grace for witch marks; the other her home for waxen or baked figures. Witch marks were considered any spot where the witch might suckle an animal-like demon given to her by the devil himself.   The woman said they found two such marks, but the case still did not go to trial.

Colonial authorities in Williamsburg, nor in the local court in Princess Anne County, were willing to declare Sherwood a witch.  It was returned after an attempt to take it to a higher court.  County justices ordered a “trial in the water by ducking” after a search of Grace’s home.  She was taken to Lynnhaven Parish Church and placed on a stool and ordered to ask for forgiveness for her witchery.  She is said to have replied, “I be not a witch, I be a healer.”

A trial by ducking, or water test, was considered controversial and no longer was being used in European courts at the time of her trial.  This test involved binding her hands and feet and throwing her into a body of water.  Grace Sherwood may have been tied with the thumb of her right hand to the big toe of her left foot and the thumb of her left hand to the big toe of her right 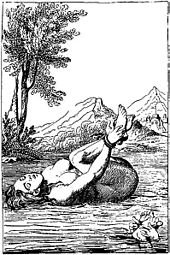 foot and tossed in the water.  In this case, it was the Lynnhaven River.  If the accused sank, they were presumed innocent.  If the accused floated, they would be found guilty.  They say that the water was considered a pure element, so if the defendant were to float, the water was rejecting them.  Sherwood agreed to the test.  She was taken down a dirt road, known now a Witchduck Road, to a plantation near the mouth of the Lynnhaven River.  News spread fast of the trial and attracted people from all over the colony.  It is said that people could be heard shouting “Duck the witch!”

According to records, the test was administered on July 10, 1706 and Sherwood floated.

Another story is that once she was rowed out into the river she stated “Before this day be through you will all get a worse ducking than I.” and was cast into the water.   Once she was pulled out of the water a downpour reportedly started, drenching everyone looking on. 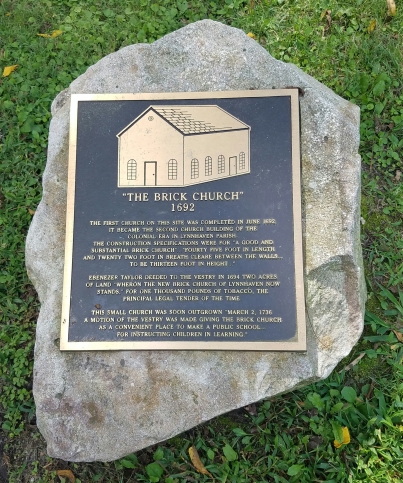 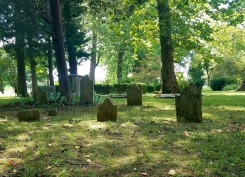 Once she reached the shore after freeing herself of her bindings,  woman were once again instructed to look for markings upon her body and found two black marks.  She was then convicted as a witch and ordered to await the court hearing in jail.  She was marched to the jail, which was located near the present day site of Old Donation Church.  No records of another trial exist but she did appear in front of the court around 1708 to pay a debt and petitioned for a reinstatement of her land in 1714.  Her request was granted and most scholars believe that she has already been released from prison at this time.  This would have put her in prison for almost eight year. She remained on her land until her death sometime in 1740.

Some historians believe that Grace Sherwood was the only woman accused of witchcraft in Virginia.  This is probably something that would contribute to her fame.  But, little is actually known about the woman herself but what is available in court records.  In stories she is often portrayed as a healer and friendly to animals.  Some descriptions include her as being beautiful and attracting male attention.  This was thought it may have angered local wives.  She was also said to be strong-willed and a non-conformist.  Historical record doesn’t actually support any of these descriptions. 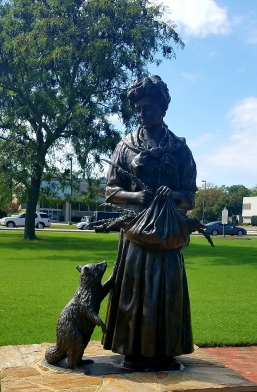 There are several landmarks in Virginia Beach that are named after our popular witch.  These places include Witchduck Road and Witchduck Point, where the trial allegedly took place.  In Pungo, she is an honorary official in the annual strawberry festival.  In colonial Williamsburg, a reenactment of her trial is put on.

In July of 2006, 300 years after her trial, the Virginia governor, Timothy Kaine pardoned Grace Sherwood.  They mayor at the time read the pardon aloud during a reenactment of the trial at the Ferry Plantation house.  It was also declared that July 10th would be celebrated at Grace Sherwood day. 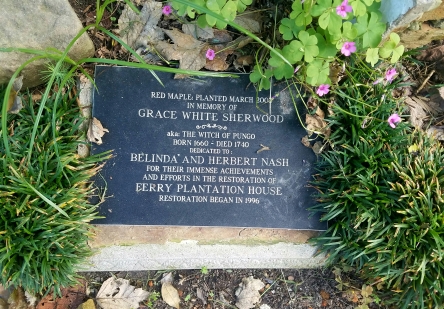 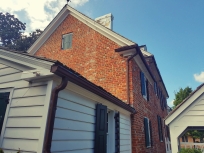 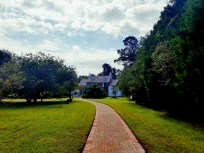 According to local residents, a strange moving light still appears each July over the spot in Witch Duck Bay where Sherwood was thrown into the water.

I can say that this local legend of the Witch of Pungo has certainly put a spell on me.